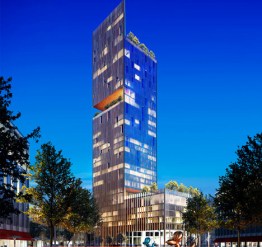 On 22 April, Bouygues UK announced the award of the Manhattan Loft Gardens project for which the company had been named preferred bidder in September 2014. The official signing of this contract, which represents a gross development value of £250M, is just reward for the creative spirit of our British subsidiary which proposed its client innovative construction modes to build this 143-m high tower in optimum conditions.

The project is shaping up to be a genuine technical feat. The brief given by promoter Manhattan Loft Corporation to the SOM architects’ firm for Manhattan Loft Gardens could be summed up in a few words: “Imagine the most exciting tower ever built”. The result lives up to everyone’s hopes. Located in Stratford, in London’s East End, the tower is being heralded as one of new London’s most iconic buildings with its double cantilever, 42 storeys and, what gives the project its distinctive stamp, its three panoramic sky gardens which will offer a breathtaking view over the capital city. In addition to its multipurpose living spaces, the tower will also include 248 luxury apartments, a 150-room hotel, a spa and three restaurants. Work is scheduled to be completed by spring 2018.

With this new prestige success, Bouygues UK is helping shape London’s skyline of tomorrow. The company is also confirming its place as a benchmark player on the British construction market.